A Weekend At The Ballpark (t-shirts and hats)

Last weekend I spent Saturday and Sunday at SunTrust Park. Saturday was for Mizuno at their Mizuno Experience Center. Sunday was for Xfinity and the Braves.

Saturday I painted in-store for at the Mizuno Experience Center. It is the only Mizuno store in North or South America. I had created art for them which made its debut on a nice t-shirt they were selling. I was in store for the afternoon painting on baseballs and baseball bats and drawing for people. I took pictures and told jokes. We had a good time. Painting smiley baseballs is a pretty nice job. I even painted on a wild little girl’s balloon. Then she let it go.

Thanks to Reid Harper and the gang for making this opportunity happen. They gave Maria and I a couple pairs of fancy Mizuno running shoes. I have been wearing them with my overalls to paint in downtown for my current mural. Makes a nice cushion for hours standing on concrete. Thanks Mizuno!

As always, I couldn’t do any of this without Maria standing by my side and helping me all the time and all the way. :) 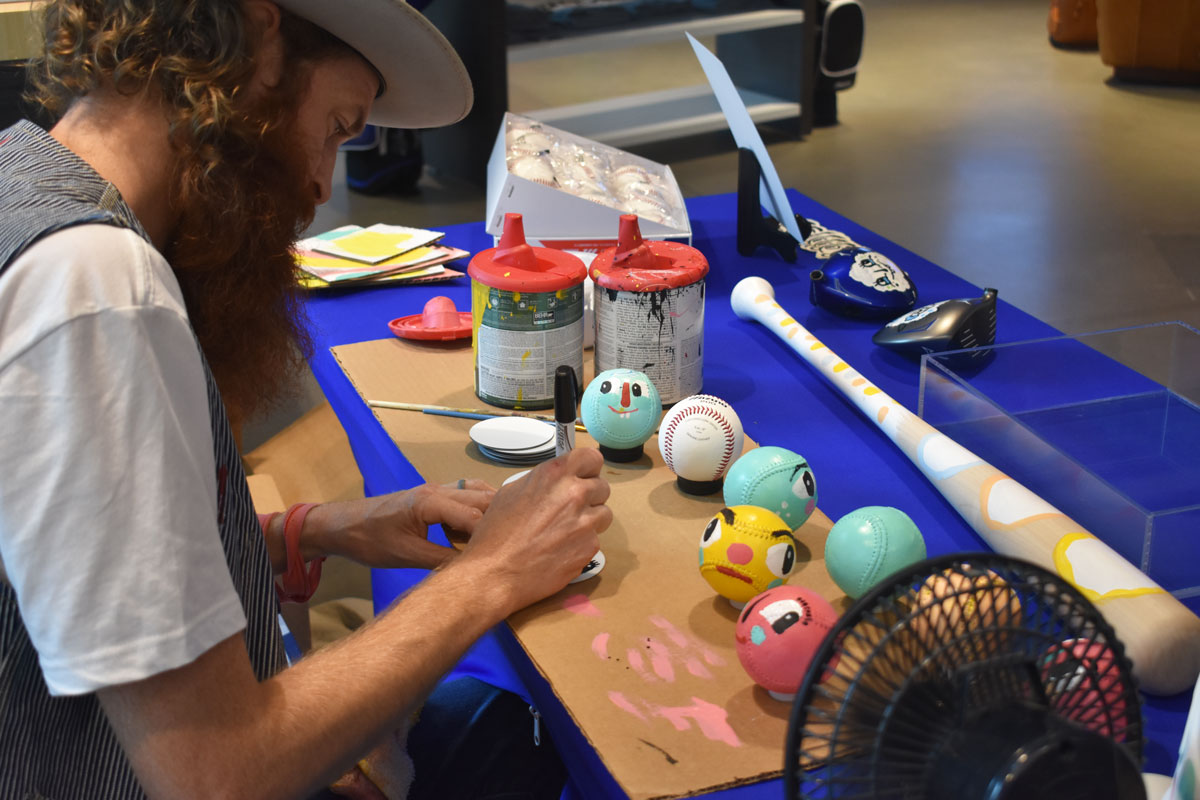 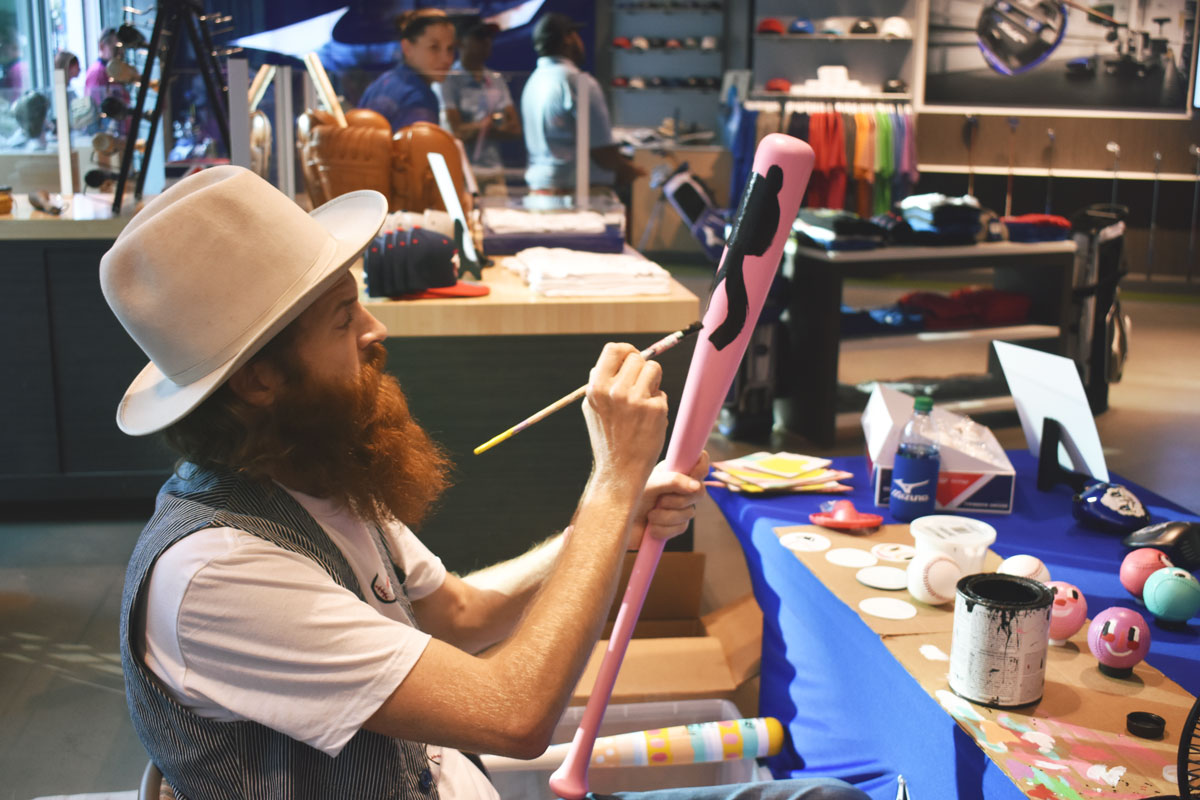 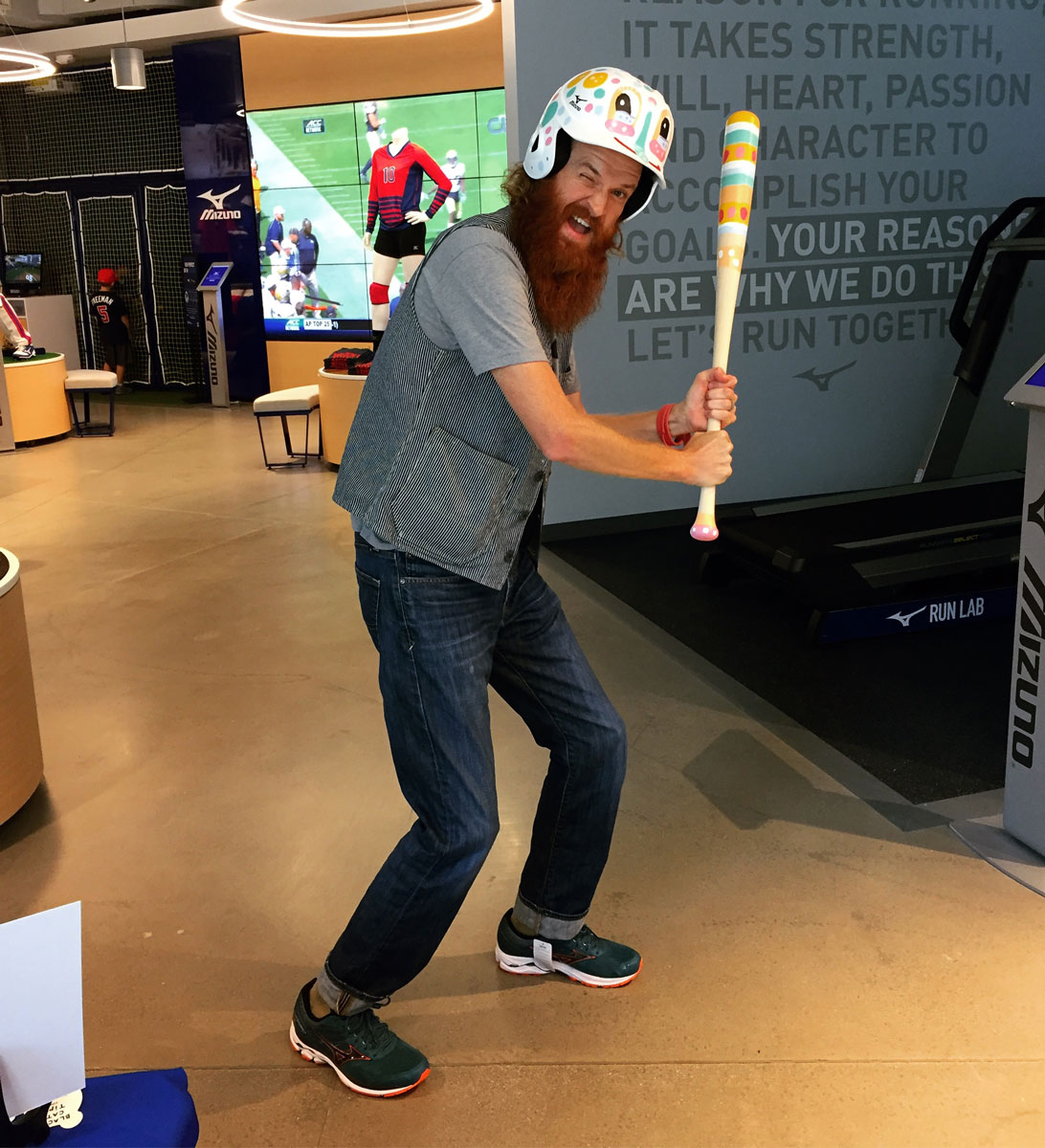 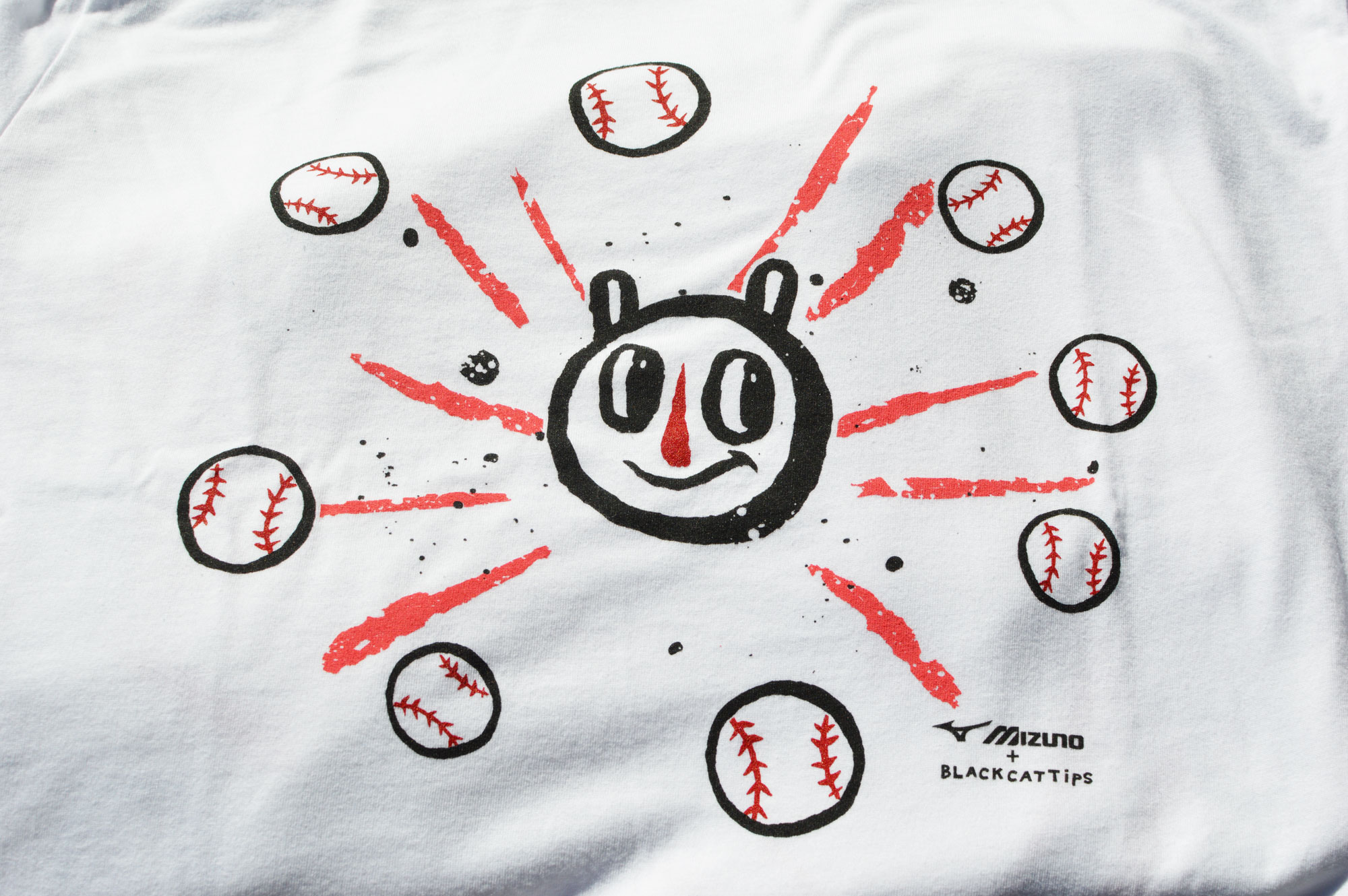 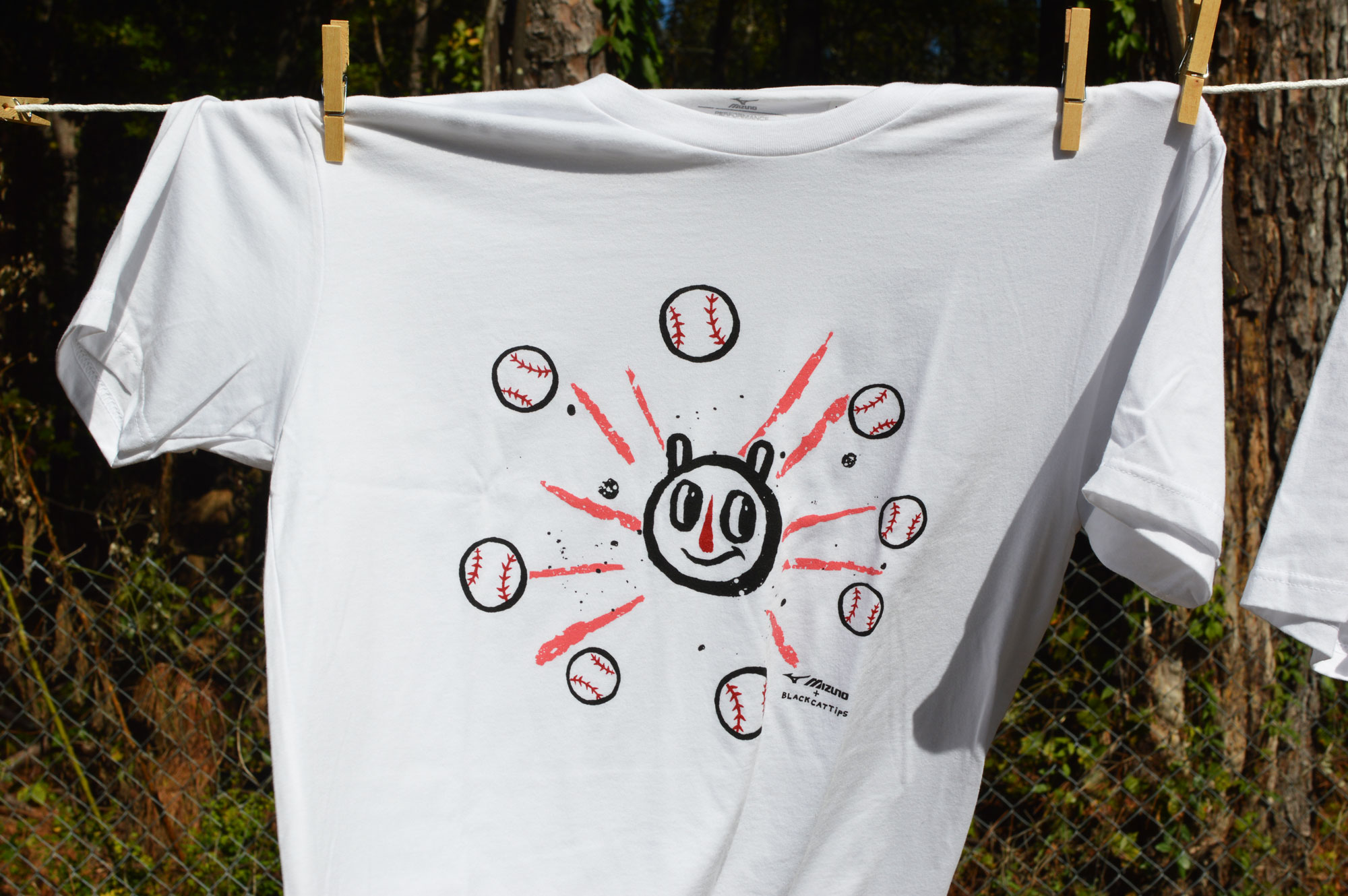 Sunday we went back to the ballpark for the last Braves home game. This time we were with Xfinity in their Rooftop Lounge high above SunTrust Park. I had created a really nice quality ball hat with Xfinity and we were handing them out during the game. I signed many hats and shook many hands. It was enjoyable for me but a little overwhelming when I looked at the long line of folks waiting —Take deep breath and start talking. I only messed up my signature once — the woman grumbled, “I don’t want that one.” Luckily, we had a whole box full. Whew… that was close.

Next we walked to the Xfinity Store Grand Opening down the street at The Battery where we sat at a table and talked to more nice people. Xfinity had created some really fresh t-shirts with my Elephant Party art on it for their flagship store’s grand opening weekend. I felt honored to be there and they treated me really great.

Thanks to Walker Anderson, Stephen Clark, my helpful team at Gloss Marketing, and all the nice folks at the new Xfinity store. It was an amazing and invigorating weekend. Then I came home and laid down. 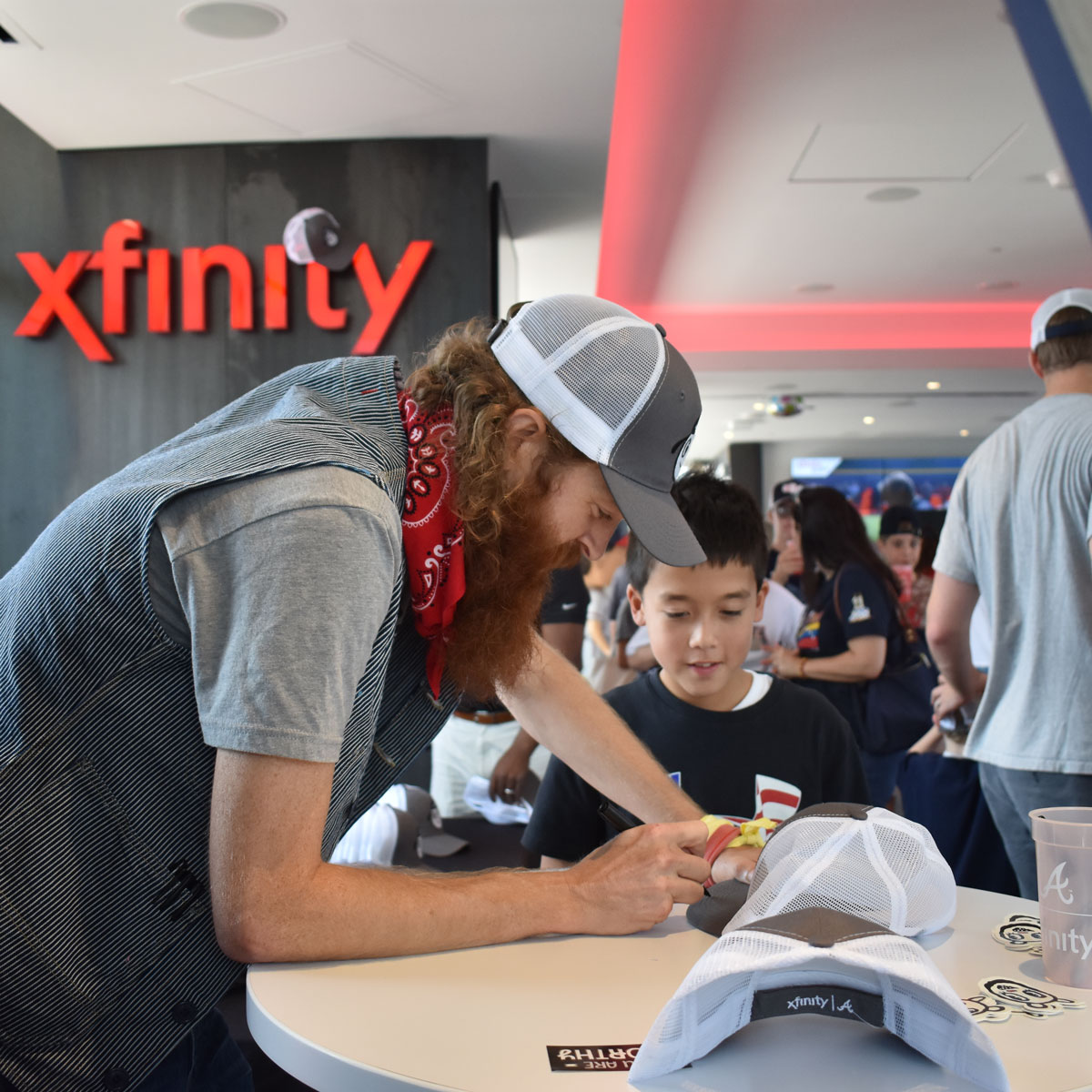 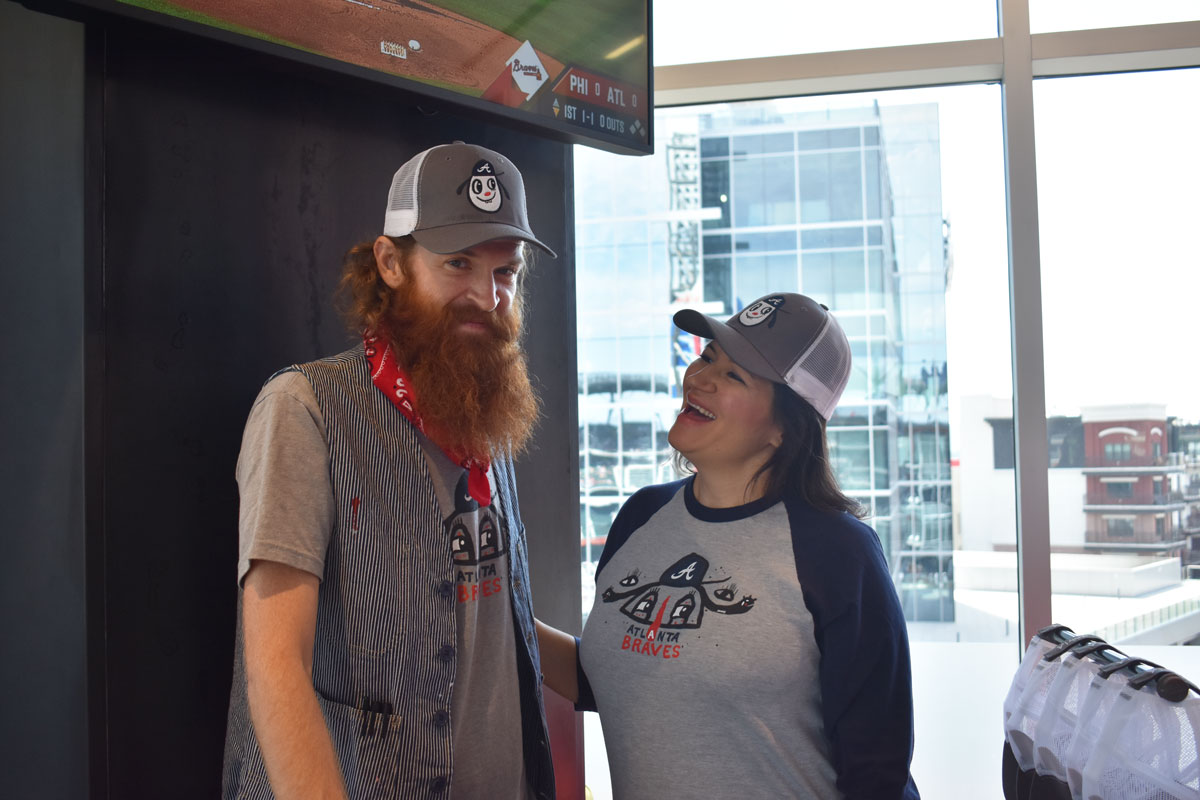 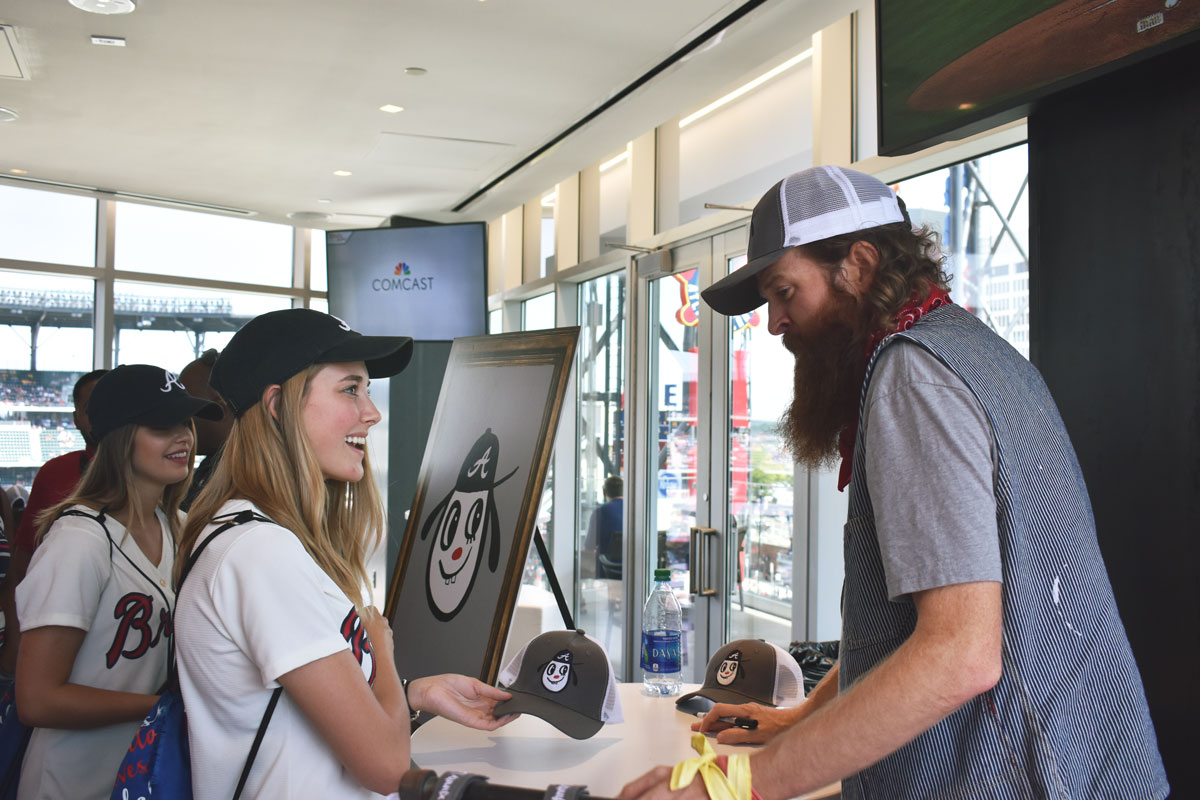 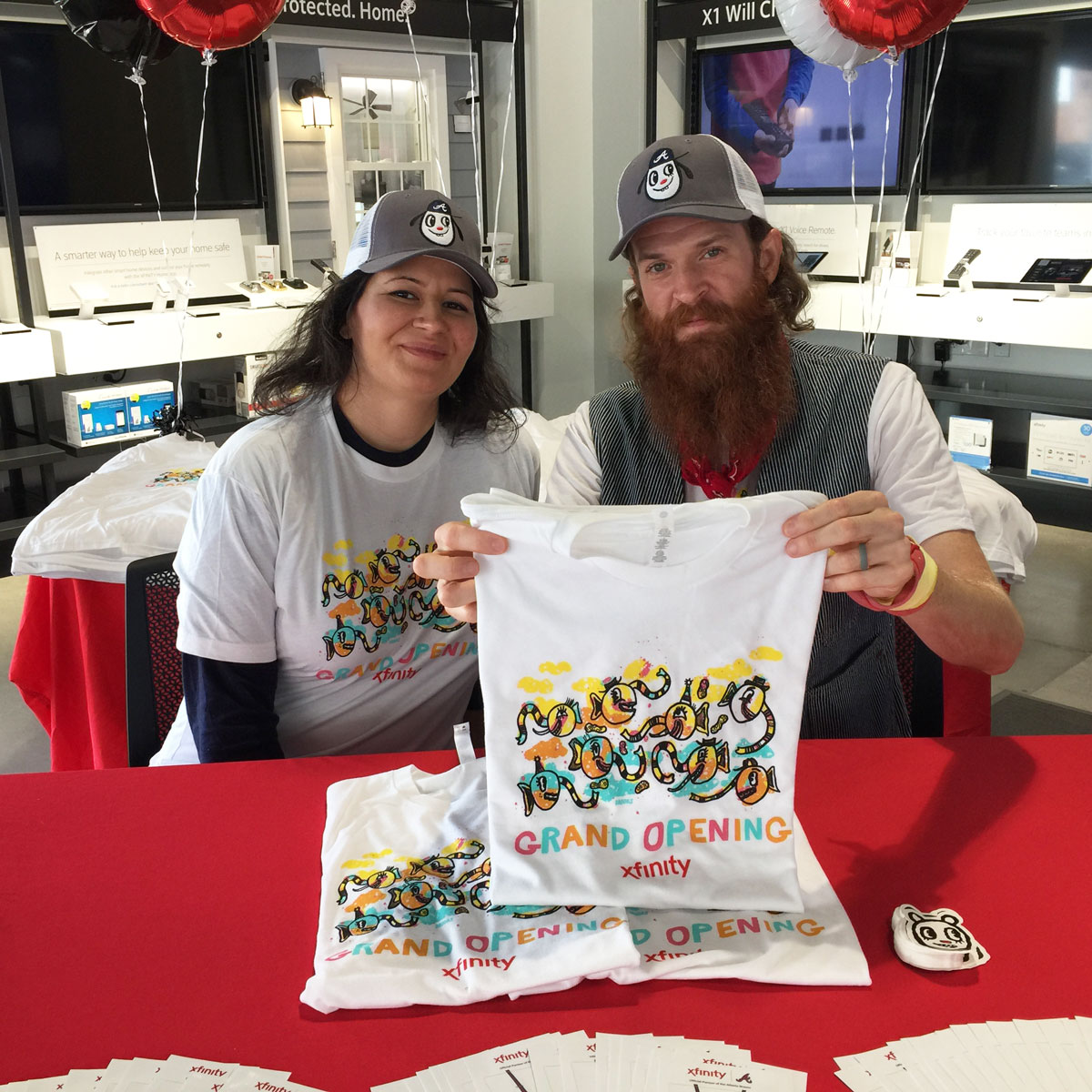 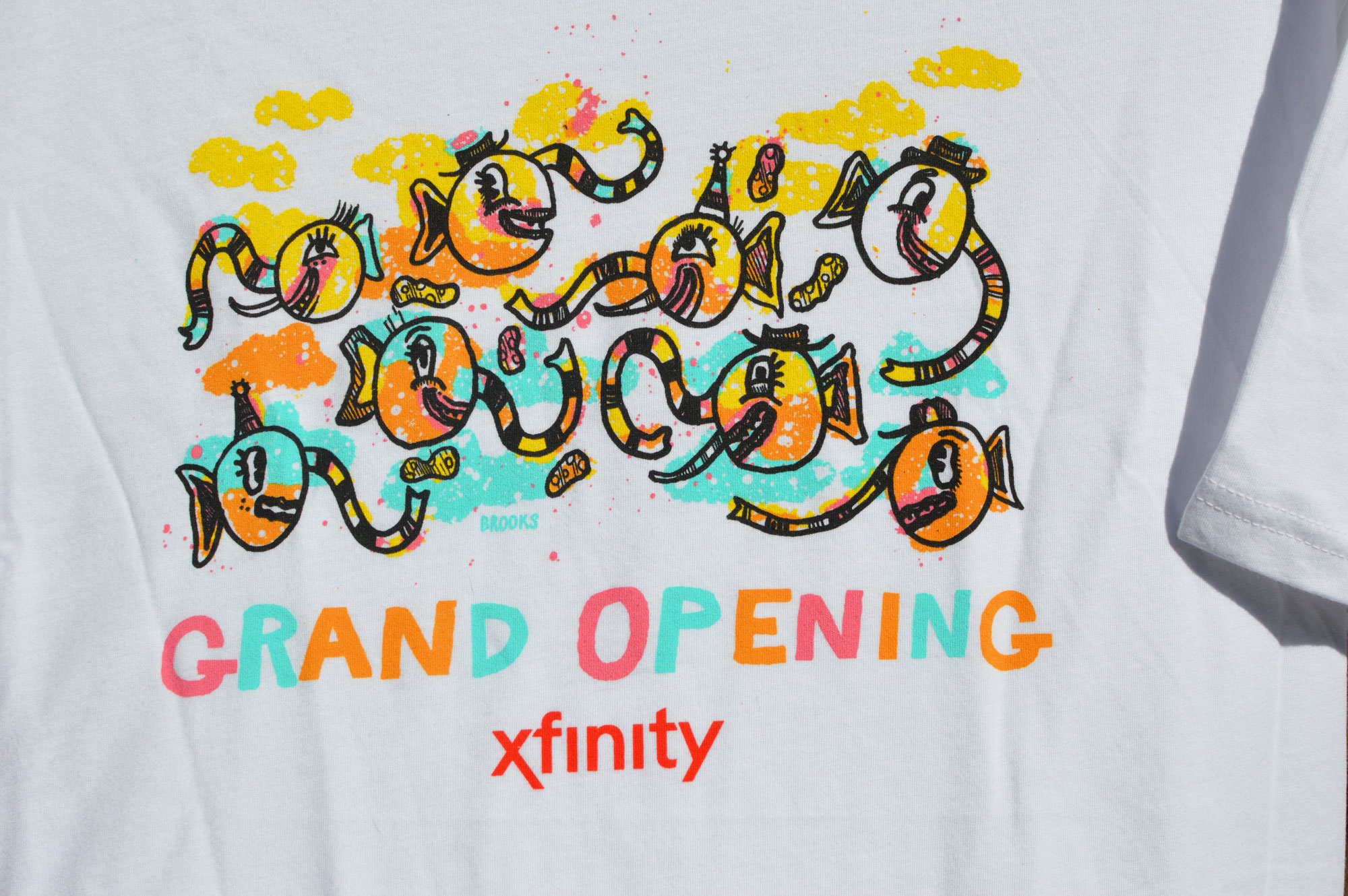 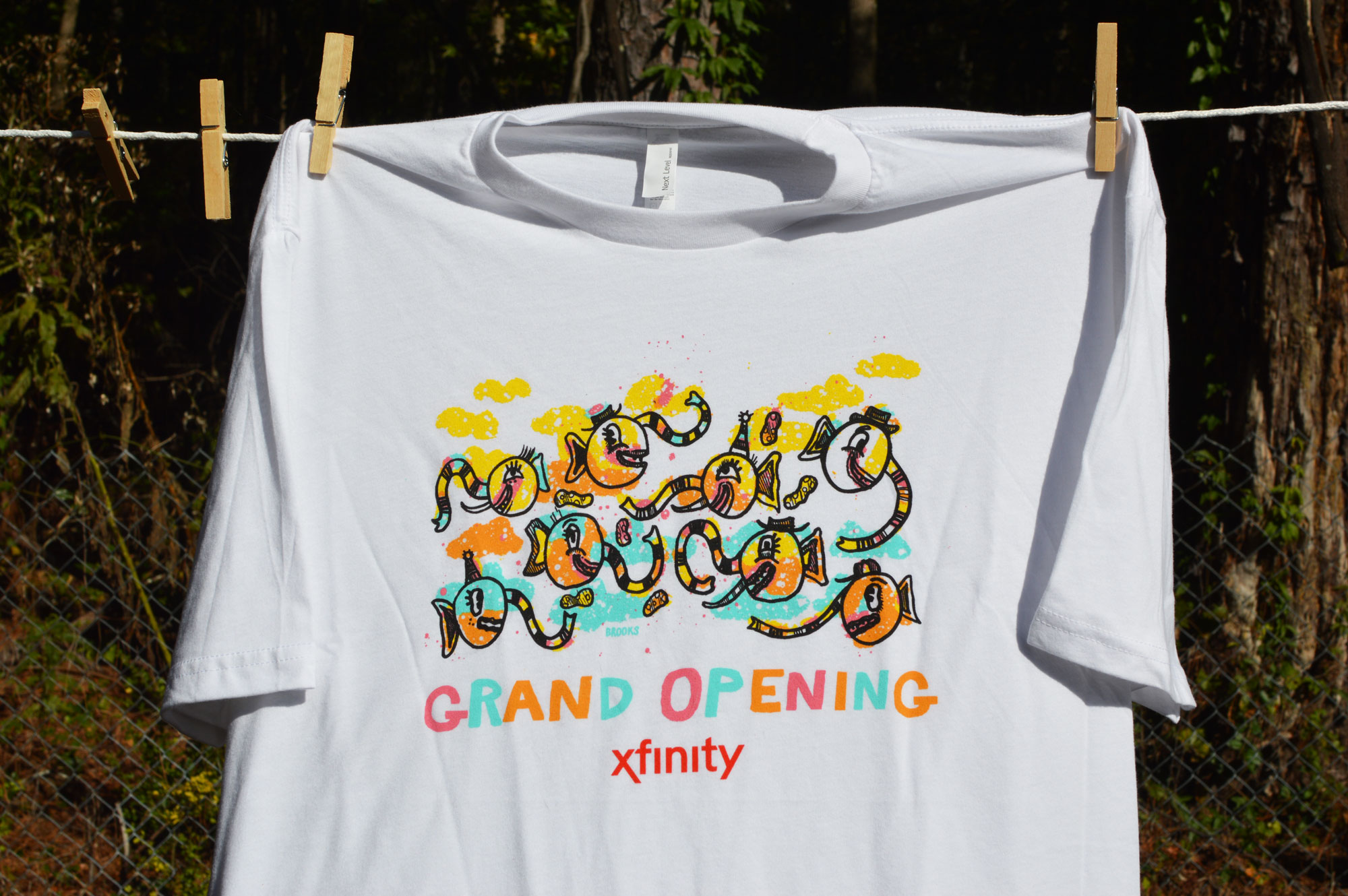 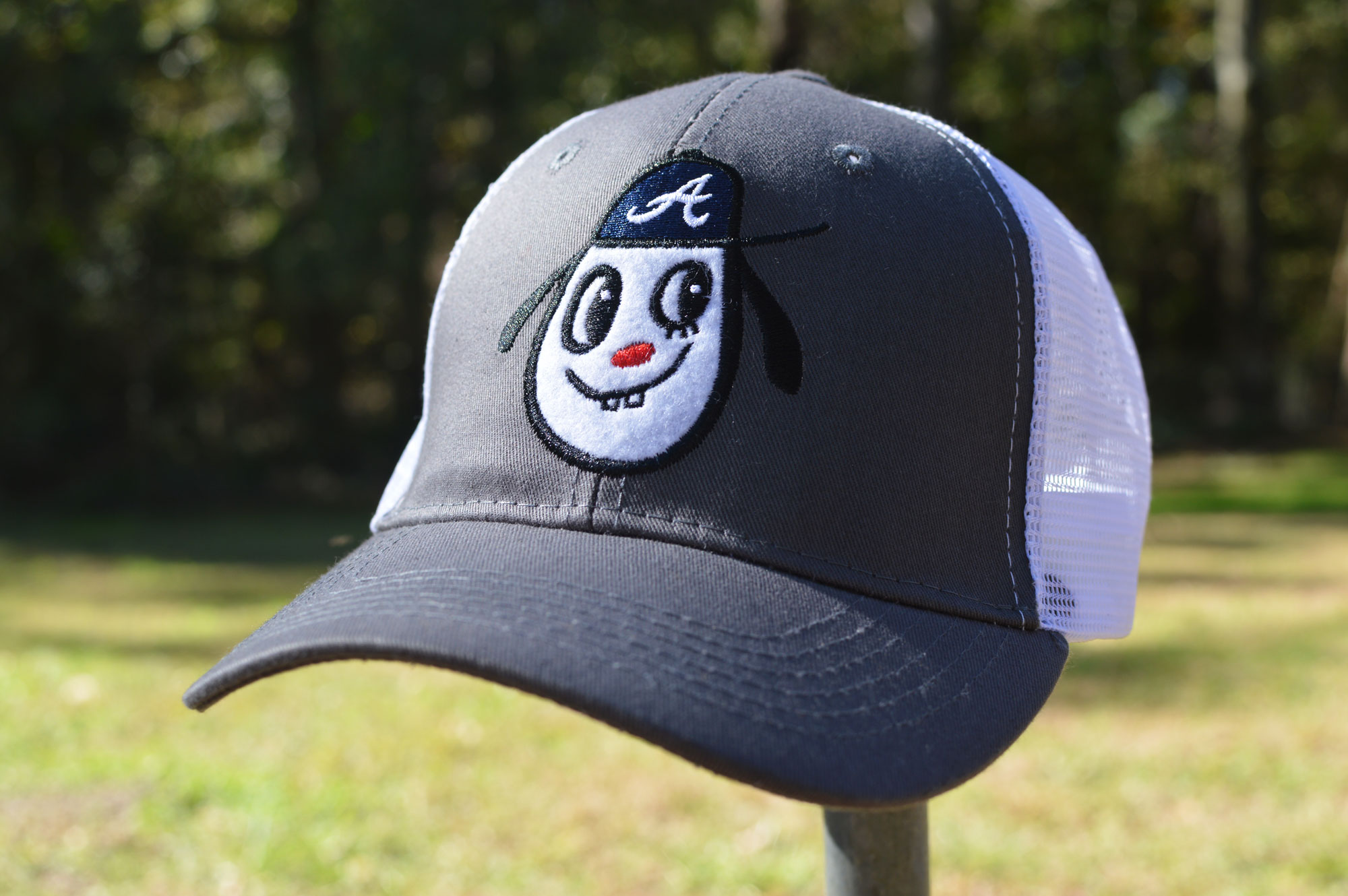